for lengthy conversations with French Buddhists

on the sandy cliffs of Margao, where I got my nose pierced

the tens of millions of silvery sand grains

which shimmered with the sea in the too-early moonlight

as we kicked amber beer bottles into the waves,

where they would float in, back, out…there I was

finally understanding what the hippies were raving about

the wind carried my hair into the sky

and I walked into the ocean fearlessly,

looking great in my Sunday best.

Now I think I may have drowned there, three years past

I do not recognise me

When I first went to India, I wrote a piece concerning drowning and being drowned in a culture that was not my own:

“Each of her parents had gone their own way. Her mother had walked out of an icy, damp land, hair blowing in the wind – Ireland, the place she mentioned with longing sighs and wistful glances out the door. Her father had stood tall on the decks of ships way out across the Caribbean, traversing the dangers of South America, a land that had chiseled him down and made him a man.

So it was only natural that, after they’d all been together on the plains of Africa, that she would dive off the deep end and drown herself in the madness of India.

The drop into India was longer than she expected. She fell silently, her eyes open and her arms outstretched, until she crashed into the water with a mighty SPLASH, where it tore at her clothes, ripping out her hair. She sank swiftly and silently, shooting down by her skeletons of dreams and tattered kelpy thoughts, sinking deeper and deeper into darker and darker waters.

She came up for air in Agra, where she found a sort of life raft named Andy which carried her along for a while so that she could wipe her hair out of her eyes and catch her breath. All the water she’d swallowed stayed down, and he told her that she should keep it there because it would keep her alive.”

Now I am melting, falling into this wasteland that says I belong,

I am overcome with memories and confusion

this constant reminder of You Do Not Understand,

You Do Not Belong

even though I look and speak like a native

I have perfected this chameleon act, blending

speaking this language to communicate a modicum of thought.

– And yet, it is never enough.

I am exhausted of getting everything wrong, failing

I truly just want to get back to a language I can speak fluently,

speaking the truth into every ear, bold in faith

knowing that I am wholly loved and that I love wholly.

Let me fight this current, hold down this fiery water that burns my lungs

offensive, grating, I will breathe it

and swim to summer shores

then from there learn how to breathe air again.

I found my missing nosepin.

On a crazy night out on the boardwalk, running around, I’d taken it out and tucked it into my wallet so that nothing bad would happen to it while I was pretending to be a robot walking on a tightrope and amusing the various inebriated passersby.

Again, this doesn’t seem like that big of a deal. But it is to me.

This marks the two year anniversary of my trip to India. 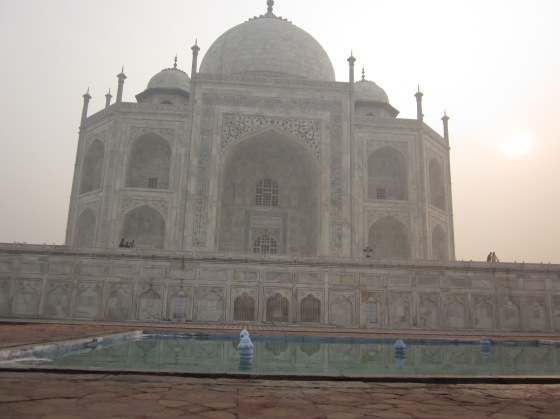 and this is what i saw

Today we remember the 200 million.

My prayer is that somehow, someday I will be able to work against this. Right now I’m just another plaid-wearing, coffee-drinking college student who wants to change the world, but I believe that this truly is my calling in life.
What is a girl’s life worth?

“I will keep my dreams, and, like rabbits from a hat, I will make them appear.”

In ten days I’m going to get on a plane and fly away. Yes, I’m going back – back to being a present member of the Wright clan, mandazis, lesos, pikis, hilarious road trips in our crowded land cruiser, braided hair, mudding houses, in-your-face chicken, eating white ants and saying sindiyo all the time.
But away from salwar khameezes, dhal chawal, autos, dupattas, long afternoon trips to the bazaar, getting late-night domino’s with my roommate, and saying, “अच्छा” all the time.
While I’m happy to go home, I’m sad to leave.
However, I just found out that I can write in Hindi on my blog, so that is fantastic.
शान्ति ,
रिचा
Twas the night before Holi,
And all through the streets
All the people were dancing
To hot Bollywood beats.
Colored powder they threw,
Making clouds in the air
That settled and stuck
In everyone’s hair.
A pale foreigner came,
Her camera in hand,
Not used to the dances
Of this India land.
They eagerly showed her
How to shrug to the beat.
How to wave her arms skyward,
How to kick with her feet.
She joined in the throwing
Of the colors so bright
Each neon shade flying
Lighting up the dark night.
Finally, off to bed
After hours of fun
Still excited, still eager
Of more color to come. 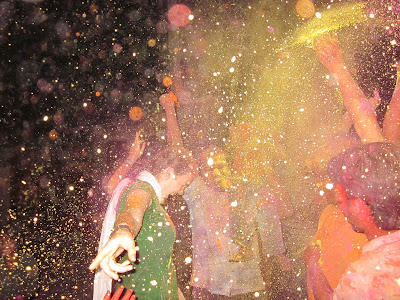